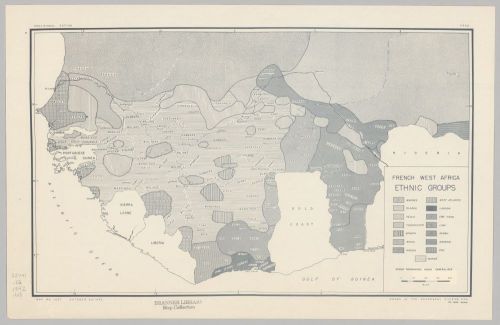 Stanford University is nearing completion of a great new resource: putting their collection of OSS maps online. Julie Sweetkind-Singer (Assistant Director of Geospatial and Cartographic Services, Branner Earth Sciences Library) notes that Stanford has about 700 maps. It’s not definitively known how many maps were made by the OSS Map Division (headed by Arthur Robinson), but she cites an estimate of at least 5,752.

During a recent AMA, I asked Marcy Bidney, Curator at the American Geographical Map Library, how many maps were in their collection:

It would be great if AGSL were to link through to the Stanford project on their own digital collection site. I suspect the latter has the largest collection of OSS maps outside NARA . NARA states that it has about 7,500 OSS maps (p.24 of this document), but an item-level listing has not yet been made public, although I understand the number Julie quotes above (5,752) is based on such a list by a map librarian colleague.

The OSS also produced about 200 written reports which often contain maps. These are early examples of intelligence briefings and were written by members of the Research and Analysis (R&A) branch of the OSS. A searchable listing is available here.

The Stanford maps are available here.

This entry was posted in Uncategorized. Bookmark the permalink.

This site uses Akismet to reduce spam. Learn how your comment data is processed.